Week three – introducing Charlie, soon to be the toughest CubeSat in the universe (probably)…

In this post – Charlie the CubeSat; baking and remaking CubeSat structures; rewards are shipping; another (funded!) student opportunity; servers and webcams; book of the week; meet up and more

Another busy week as we start receiving hardware to build engineering models of the Interplanetary CubeSat Mothership and its propulsion systems for testing. Amongst the first items to arrive this week was a 1U Pumpkin Rev. C skeletonised CubeSat structure that we’ve named Charlie. 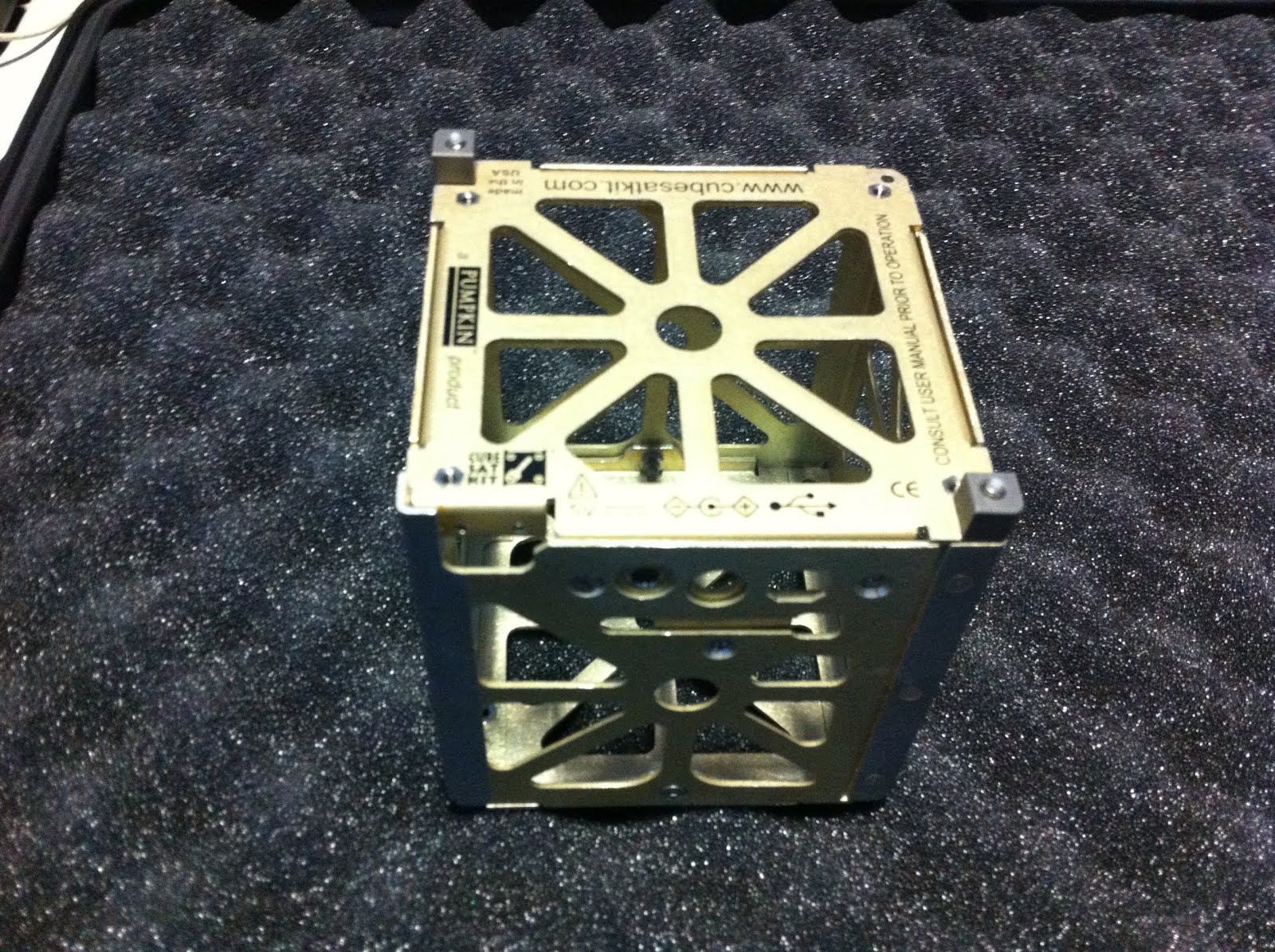 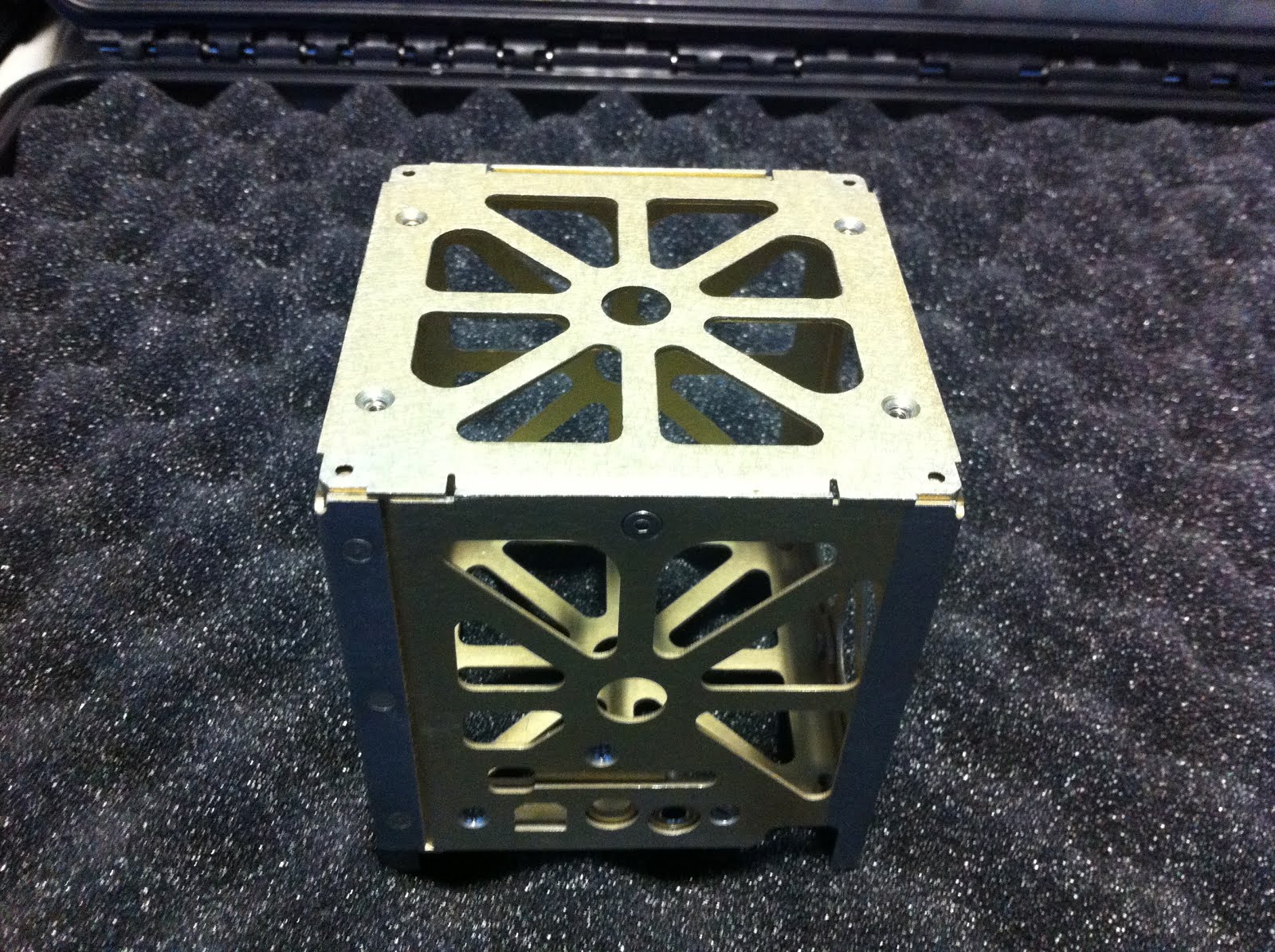 Charlie has lead a colourful life on the banks of the Clyde in Scotland as a demo and engineering structure, and came to us inexpensively due to a few missing feet and fixings plus the odd scratch and scrape, but is currently being pampered and restored to full health. Replacement items such as new feet, solar panel clips, micro switch and a shiny remove before flight pin are on their way from San Francisco to help get this hardy adventurer back to full fitness. Unfortunately for Charlie, we’re then going to spend the next six months baking, blasting, freezing, irradiating, shaking, shocking, sonicating, sterilising, and otherwise being a bit rough and tumble with our plucky little structure as we test and refine our aseptic assembly processes and radiation hardened subsystems. Keep an eye out for Charlie’s heroic adventures in future blog entries.

You might be wondering why we might need to test something as standard as an off the shelf Cubesat structure. We have to comply with strict planetary protection rules as we are an interplanetary mission and so basically have to sterilise every component that goes into the spacecraft. Standard CubeSat components are typically qualified for operation in the industrial electronics temperature range (-40C to +80C), but we will need to bake or autoclave individual components and the entire assembled spacecraft at temperatures of about 120C or even higher for tens of hours. A tough Pumpkin structure like Charlie would probably be fine, but the test hasn’t been done, so we need to do so to ensure we don’t have a nasty surprise. If there are any elements of the structure that are marginal at these unusually high temperatures, then we may have to remanufacture them in a different material and replace them. For example, the separation spring pins in the feet (the white dots in the middle of the grey feet in the top left and bottom right of the left hand image) are made of Nylon – it might be wise to replace them with a material such as titanium for safeties sake.

The British Interplanetary Society (BIS) have sent out the first batch of special membership emails giving you access to their publication Spaceflight, so check your spam folder if you haven’t received it yet. If you’ve converted your Kickstarter pledge in the last ten days then it will be in the next batch of emails that the BIS send out, hopefully next week. The next reward to go out will be the e-certificates of mission participation. We’re going to do a bit more website testing before we go live to everyone, but when we do you’ll be able to enter your details for your certificate and download it. It looks very nice and we’ve had a few requests to provide printed and framed versions so we’re looking at how to do that at a reasonable price for those who are interested.

We’ve had lots of student (and non-student!) volunteers fill in the form we posted last week for those looking to add some hands-on interplanetary space exploration to their CV/résumé. All those who provided data are currently being contacted, but it’s not too late to sign up if you’re interested. We’ve received a very kind offer to fund a second student to work on Pocket Mission Control development with Samantha, so if you are a student software developer and can satisfy the ESA SOCIS eligibility criteria (although the funds don’t come from ESA this time – we’ll announce who later), please get in touch.

We’re continuing to make good progress bringing up the various production and development servers that we need to run the mission, with document and source code management and version control systems coming online this week. We’ve also started building the webcam system and bench top lab that will enable you to keep an eye on Charlie and friends as they are built. Once we’re sure everything is functioning properly and stable we’ll post links so you can access them and their documentation.

We’re going to post an interesting/useful book recommendation to our Twitter feed every week from now on. This week we’re recommending ‘Fly Me to the Moon: An Insider’s Guide to the New Science of Space Travel’ by Ed Belbruno with a foreword by Neil deGrasse Tyson which we think you’ll find interesting and accessible and of course very relevant to our particular mission!

We’ll be out and about (with Charlie!) next Saturday 21st September at the Make It! Festival at the Knowle West Media Centre in Bristol, UK – come and say hello.

Don’t forget if you backed the original Kickstarter but haven’t converted your pledge yet, you need to do so soon to ensure you receive all the rewards described in the Kickstarter by filling in the form here – time is running out! If you didn’t back the Kickstarter we can’t offer all the rewards originally offered, but if you fill in the form here you can still take part. If you indicate at what level you would like to participate, we’ll email you further details.

Thank you again to everyone for all your support – onwards to the Moon!

Michael and the Pocket Spacecraft team

This entry was posted in Blog. Bookmark the permalink.